April Fool’s Day may be behind us, but we’ve still got a clown worth your attention. Shaco fills a wonderful niche of playing to tilt your opponents, and we’re taking that angle with him.

Shaco is a Jungler who wins games off successful ganks. Unlike some other Assassins, he doesn’t fall off in the late game, as his kit has what it takes to one shot the enemy ADC even in a 5v5 scenario. The champion is challenging both at the micro and macro levels, but he’s definitely worth mastering. 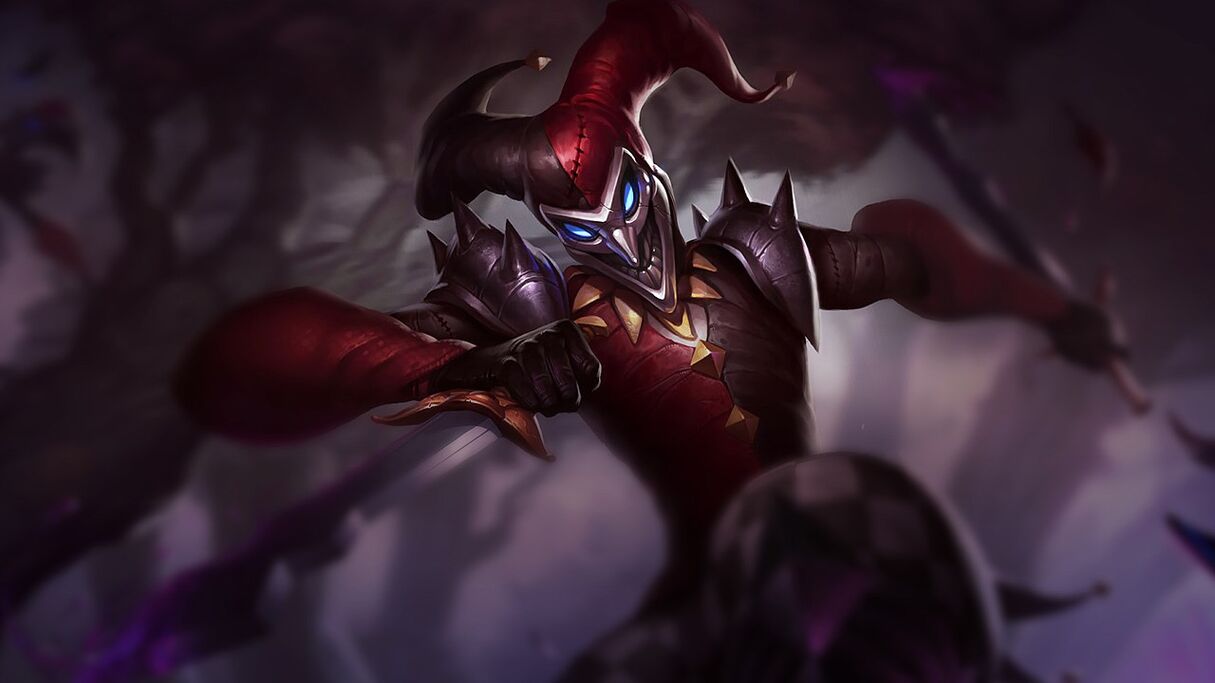 Passive: Backstab makes all hits from behind deal critical damage. Sounds extremely simple, but you must utilize this passive to kill squishies. If you’ve tried Shaco a couple of times yourself and failed, not aiming to proc the passive is definitely one of the reasons why.

Q: Deceive is both a dash and invisibility. Sounds almost too good to be true, but this is an actual spell in the game. It has many uses: chase, retreat, gank, trick. The last one is the funniest: like most LeBlanc players, you can try to take the supposedly dangerous escape route while enemies are trying to catch you on the safest.

The only downside of Deceive is that activating the ability leaves a puff of red smoke. One can even see through the fog of war, so avoid using it just for the lulz: attentive enemies can spot you from the other side of the map.

W: Jack in the Box is that small projectile-throwing dude which looks ridiculous, yet applies Fear when approached. We’re going to use him while farming, setting up ganks, and even executing ganks.

The last line is what your typical guide would say, but there’s actually one more purpose of the box. You may use it to protect the squishies of your team rather than attack the enemies’. Just throw a box next to your ADC, and Tanks/Assassins may actually get stuck mid-combo.

E: Two-Shiv Poison is our gap closer and finisher. Throw a dagger, pose with swagger. This ability syncs well with the passive. Once your foe is in danger, they either face you or run away while slowed by the Two-Shiv Poison while you dish out a generous helping of Backstab crits.

R: Hallucinate gives us a second Shaco. He deals AA damage, he procs on-hit effects, and he confuses enemies. Unlike some summons, he is actually controllable with the help of Alt+LMB. It provides a good way to bait enemies toward or away from you. Besides that, you can use the clone to hit a foe in the back either with him or yourself.

On death, the clone explodes with damage and leaves three weakened boxes. If fake Shaco is falling to ranged auto attacks so you can’t get close, consider placing him at an escape route to make use of the Fear later. Alternatively, try to save a low HP clone and use him for scouting through the fog of war.

Killing Jungle minions with Shaco is pretty straight-forward: try to backstab them and bait them into boxes. However, your very first PvE victims deserve a separate section.

First, you place three boxes at the wolves. Then, you go to the buff holder and use the fourth box as well as your team to kill it. As a result, the first boxes destroy the small wolves, so you can come around to kill the large one. Kill the scuttlecrab, and you get level 3 in no time.

Once you’re level 3, it’s time to look for kills. Entry points are the same: the river, your bushes, enemy bushes. However, it’s possible to get creative and find openings with the dash part of your Q.

Don’t forget to place your traps to cut off escape routes. Enemies get scared even if they don’t actually trigger them.

Deceive duration scales with levels, and so does the duration of Two-Shiv Poison. The correct order is Q>W>E. For the first three levels, you start with W, get Q and then proceed with E.

Shaco needs burst to assassinate targets and high attack speed to get multiple backstab crits. As a result, his core items are Skirmisher’s Sabre – Warrior, Ravenous Hydra and Duskblade of Draktharr. Berserker’s Greaves are a natural boots choice.

The idea is the same, so we’re taking Electrocute as our Keystone. The full layout is Electrocute->Sudden Impact->Eyeball Collection->Relentless Hunter; Absolute Focus->Gathering Storm.